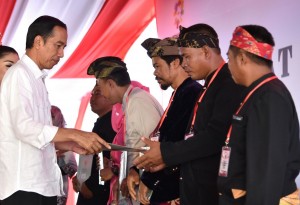 In his remarks, the President said that every time he visits a region or a village, most of the complaints received are related to land disputes.

Therefore, the President said that this year the Government will issue 5 million land certificates for the people all over Indonesia.

For NTB province itself, President Jokowi quoted a report from NTB Governor Muhammad Zainul Majdi, that out of 1,600,060 certificates to be issued, only 870,000 of them are already owned by the people.

The President also said that Ministry of Agrarian and Spatial Planning/National Land Agency hopes that in 2022, all residents in West Nusa Tenggara (NTB) province will already have land certificates.

President Jokowi further said that land certificate is a legal proof of land ownershipand and once one has a certificate, they can avoid land-related issues in the future.

The President added that a land dispute occurs because one does not have a land certificate.

Some people are involved in land disputes because they dont have land certificates. It happens in many regions  in Java, Sumatera, and Kalimantan. Therefore, I have instructed Minister of Agrarian and Spatial Planning/Head of the National Land Agency (BPN) to immediately give certificates to the people and the budget is taken from the State Budget, the President said, adding that if the targets cannot be met, the Minister will be replaced.