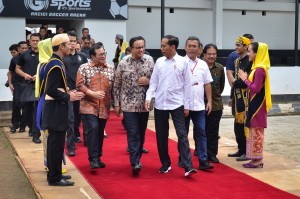 According to President Jokowi, every time he visits the region, he always receives complains regarding land dispute. (I received the complaints) not only in Jakarta, but throughout Indonesia. This has not been solved for years and decades, he said.

The disputes, according to the President, often involve various sides, be it among the people, between the people and Government, state-owned enterprises, neighbors or among families either in or outside Java.

Therefore, we should be grateful that now we have the certificate as the legal right to the land, the President said.

President Jokowi added that there are only about 500 thousand land certificate distributed, while there are 80 million land lots all over the country to be certified. Therefore, he said, the distribution will need 160 years to complete.

Based on that situation, President Jokowi has ordered Minister of Agrarian Affairs and Spatial Planning/Head of the National Land Agency (BPN) Sofyan Djalil to speed up the issuance of the certificates. Last year, I ordered for 7 million Land Certificates to be issued and it exceeds the target of 9.4 million, he added. (UN/AGG/ES)