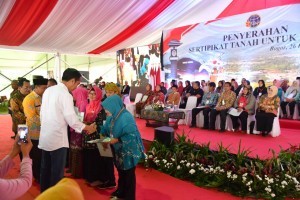 President Joko Jokowi Widodo has set target for his Government to certify all parcels of land in West Java by 2024.

In addition, he also instructed them to issue 9 million land certificates for the people around the country by 2019.

The statements were delivered by President Jokowi when symbolically handing over 4,000 land certificates in Watesjaya Village, Cigombong Subdistrict, Bogor Regency, Wednesday (26/12). The 4,000 certificates were distributed to four regions in West Java, among others, Bogor City, Bogor Regency, Sukabumi City, and Sukabumi Regency.

We hope all parcels of land will be certified in 2024. That is our target, the President added.

According to the President, there are 126 million parcels of land in Indonesia that must be certified in order to hold a legal proof of property ownership. However, the number of certified lands only reached 51 million parcels of land in 2017 or less than half of the Government’s targets. In fact, land disputes occured because people have not obtained the certificate as proof of property ownership.

The certificates are handed over to you to end land disputes, the President firmly said.

For the record, in the previous years, the National Land Agency (BPN) only issued 500,000 certificates per year, but President Jokowi urged his Government to work harder and distribute millions of certificate each year.

The acceleration in certificates issuance is included in the Complete Systematic Land Registration (PTSL) program which is also a national priority program.

For the very first time, PTSL program is conducted simultaneously in one area. This program aimed at providing people legal certainty and guarantee of their rights on land ownership.