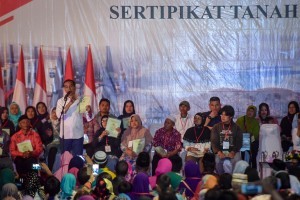 The President, who was accompanied by First Lady Ibu Iriana Joko Widodo, distributed the certificates to twelve representatives of residents.

On the occasion, President Jokowi said that the acceleration of the distribution is carried out by the Government because there are many disputes in various regions, either in or outside Java.

We have distributed 9 million certificates last year and we eye the same this year, the President said.

President Jokowi reminded the people who have received the certificates to make a copy of it and secure them inside a plastic folder so the water cannot damage it. He also suggests storing the copy and the original separately in order to avoid loss.

The loan money, President Jokowi continued, should be used for working capital.

The profit earned may be used to buy a vehicle. This is for your family welfare because it can be passed on to your descendant, President Jokowi added.