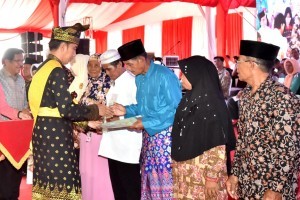 President Jokowi went on to say that the distribution of land certificates is important to prevent more land disputes and he will continue to provide the certificates to the people as a proof of their land ownership.

Based on that, in recent years President Jokowi instructed related officials to accelerate the process of land certificate issuance in order to be able to catch up and at the same time reduce the issue of land disputes. 7 million certificates must be issued this year, he added.

For the record, 3,000 residents received Complete Systematic Land Registration (PTSL) certificates. Meanwhile, the remaining half were certificates under the mechanism of Land Objects for Agrarian Reform (TORA). In 2018, the Government has issued 154,280 land certificates of PTSL program in 12 cities/regency totaling 154,280 plots of land.