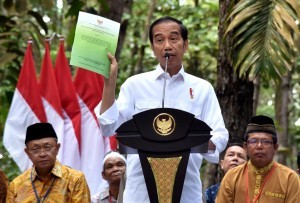 The 91,000 more hectares of land are handed over to around 8,100 families, meaning that every family gets approximately 10 hectares, the President said.

The President went on saying that the Decree issued by Minister of Environment and Forestry gave rights to the recipients to manage the land within 35 years. Besides in Riau, the Government will distribute this Decree to other provinces as well, President Jokowi said.

Nevertheless, the President reminded the residents to use their land optimally, otherwise the Government will revoke the decree. The residents can also choose their own commodity to be planted on the land, he added.

However, especially for oil palm, President Jokowi explained that Indonesias palm oil production is currently quite high, with approximately 42 million tons per year from 13 million hectares of land. If production continues to increase, the President continued, the price may drop given now palm oil is banned in the European Union because they are able to produce similar oil derived from sunflower seeds.

Therefore, the President told the people to choose commodities to be planted wisely and not focus only for oil palm, citing an example to plant patchouli, which is commonly used as oil for perfume and cosmetics. Plant commodities with bigger values such as coffee, patchouli, volatile, he added.

The land must be planted with minimum 50 percent of wood, combined with the non-forest commodities, Darmin said, adding that the Government will provide seedlings, plants and other assistances to process the commodities.

Darmin added that Jambi held a Nusantara Social Forestry Festival which served as an opportunity for the community and entrepreneurs to promote forest products.