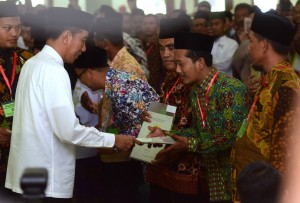 In his remarks, the President said that the distribution of the certificates is carried out in order to avoid more land disputes.

In Jakarta, there is a large mosque in a strategic area. At first, there was no problem; but once the price of the land on which the mosque is located rose to Rp120 million per meter, there was a dispute over the land rights, President Jokowi said.

Should this kind of problem occur, the President continued, the ownership can only be proven by a land certificate. Therefore, he already ordered Minister of Agrarian and Spatial Planning/Head of the National Land Agency (BPN) to accelerate the issuance of the certificates.

Furthermore, the Head of State said that in 2017, the Government had distributed 5.1 million certificates after previously only able to issue 500 thousand certificates per year.

In 2018, 9.4 million land certificates had been distributed, the President said, adding that this year’s target is 10 million and he also expressed his optimism that the target will be achieved.