President Jokowi: Do Not Pessimistic to the Economic Conditions of Our Country 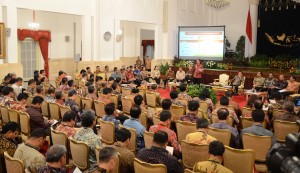 Although at the global level has occurred the weakening of economic, President Joko Widodo (Jokowi) invites all parties should not pessimistic about the economic conditions of our country. Due to figures is upon us, many guests who come to Jakarta in fact they held their thumbs up.

“Do not let us compare between of 1998 to 2015. Of course, that is very different. If we look at the economic growth, in 1998 it fell to minus 13. I just reminded in 2015 is still 4.7 percent, which is the last in the third quarter is already at 4.85,” President Jokowi said, while providing guidance on working meetings with the Board of Directors of the State Owned Enterprises (SOEs), at the State Palace, Jakarta, Wednesday (21/10) night.

That means, President Jokowi said, actually it was stuck, then we will crawl up. We hope later on fourth quarter the economic growth above 5 percent.

Regarding the problem of loans or non-performing loans, President Jokowi reminded that in 1998 was up 30 percent. But now remains 2.6 percent – 2.8 percent. Of course that is very different.

Inflation, according to President Jokowi, we should be grateful. On last September recorded minus 0.05, and is expected later until the end of the year maybe not until 4. It is drastic from a year ago, we usually over 10, but last year 8 percent.

“I think it’s good for us to go forward. Later we expect interest rates also could decline because of inflation has been declining,” Jokowi said.

Alluding to the release of the Economic Policy Package volume I, II, III, and IV, which will be immediately followed by the volume V, President Jokowi argued, the government wants everything is simplified, so much simpler.

Therefore, further President Jokowi, the Government will continue to issue a policy package, could be the fifth, sixth, and so on. “Later, the package we have perfected continuously. Will not stop, could hundredth, could be four hundred, kept every week, every two weeks, “he said.

President asserted that the Government should continue to issue policy package, moreover we have already preliminaries by Vietnam, and the growth lags behind India. “Vietnam did so quickly. If we do not want to do reform, does not want to change then we will really left behind,” he said.