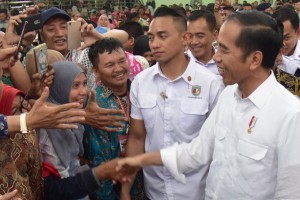 President Jokowi shakes hands with the locals during distribution of land certificate in Tegal, Central Java, Friday (9/11). Photo by: Oji/PR.

Many politicians today do not have good political ethics and manners, according to President Joko Jokowi Widodo in his remarks when delivering 3,000 land certificates for residents of Tegal and its surrounding areas, at Tri Sanja Sport Center, Tegal, Central Java, Friday (9/11).

“They are conducting politics with frightening propaganda and make people frightened and afraid,” President Jokowi said, adding that those politicians will create uncertainty in the society.

“These methods are unethical political approaches. That is genderewo politics,” the President said.

In the meantime, President Jokowi reminded the participants present in the event that Indonesia is a great nation with 263 million populations and is blessed by God with diversity.

“We have 714 ethnicities, from Sabang to Merauke, from Miangas to Rote Island and we have more than 1,100 local languages,” President Jokowi said, adding that the nation’s greatest assets are unity, brotherhood, and harmony.

President Jokowi went on to say that different political choice in local, regional and Presidential elections should not affect the neighborhood and community relation since we are all fellow countrymen. He also said that the people should maintain the Islamic solidarity (ukhuwah islamiyah) and national solidarity (ukhuwah wathaniyah).

“Do not let Presidential election, regional election or local election divide us, because those elections are regular events that occurred once in five years” the President concluded.