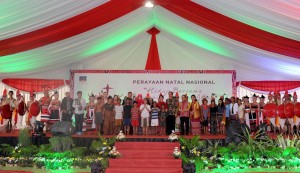 President Joko Jokowi Widodo said that the time has come for Indonesian people to move on from the culture that full of falseness, fake, hypocrisy, egoism, and less sharing with the other.

When attending the National Christmas Celebration which was held at the esplanade of gubernatorial residence of the East Nusa Tenggara (NTT) Province, Kupang, on Monday (28/18), President Jokowi asserted that celebrating Christmas means implementing character revolution and mental revolution. The main point of character and mental revolutions is to become a new human being who is more disciplined, productive, optimistic, and hardworking.

Therefore, according to the President, we have responsibility to make the life on earth better, by sharing fire and water to each other, help the other, and perform mutual cooperation. Api ata ola hege, air ata ola neni, the President said while quoting a piece of NTT proverb.

President Jokowi reminded that we are grateful to celebrate Chirstmas in a family that unites in diversity in which our ancestors has pledged to have one native land, one nation, one language, but not one religion.

National heritage of Indonesia, namely Bhinneka Tunggal Ika (Unity in Diversity), according to the President must be preserved so that nationals aspiration to materialize a prosperous, just, and sovereign Indonesia is continue to reverberate in the spirit and hearts of Indonesian people.

Pancasila must serve as the nations habit in implementing the faith, hope, and compassion, President Jokowi firmly said.

To all Christians, President Jokowi said that the celebration of Christmas must bring a fundamental change in attitude in living together as a nation.

Do not make Chistmas only a ceremony without any fundamental change in attitude, the President added.

Quoting the message from Pope Franciscus, President Jokowi said that Chistmas without reformation and attitude changing is only a play. Chistmas must bring commitment to the nation and country.

We must work hard. Kita bagerik kita baeng pili, which means we work, we get the result. Indonesia must become more prosperous, wealthy, peaceful and full of joy, the President said.

The President also quoted Bishop Soegijapranoto who said that to create a more just, fair and prosperous Indonesia is the duty of all of us, including Indonesian Christians. (TKP/ES) (RAS/LW/YM/Naster)