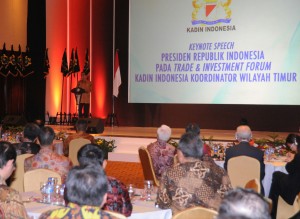 In front of the members of the Chamber of Commerce and invitees, President Jokowi said that related to trade and investment of Eastern Indonesia, actually the potential and the strength that can be raised and developed in the field is immense.

“But for doing so, it needs the support that must be done. What is that? Infrastructure, nothing else,” President Jokowi said.

Last Friday, the President continued, has already begun construction of groundbreaking for the port of Makassar, port and industrial zone that covers an area of 2000 hectares. Then later in July will begin to be built again a large port in Sorong, instead of the old port, but rather shifted approximately 30 km from the old, with a breadth of approximately of 7000 hectares. This includes the port will be there, for power plan, and of course for the industrial area.

“Through such means, I believe that the Eastern Indonesia will be able to develop faster and better,” the President said.

If we are seriously working in this Merauke, not just finished and completed, but we will be abundant of food, such thing of food will abound. Whereas around Merauke, there are four districts again with the same conditions, the land is flat, fertile, left and right there is a very large river, which can also be done the same activities,” the President said.

“Please enter the Investment but not all of them, 70% held by state-owned enterprises, 30% are welcome for private parties. 30% that is already a lot, because millions of hectares of such areas. Although by a consortium of several companies are also not necessarily be done immediately,” the President said.

On that occasion, the President also gave another example of Maluku, Ternate and Tidore, which has a very abundant fish. According to the President, during the night there such as the night market. Sparkly lights aplenty, taking fish but unfortunately the ship does not belong to Indonesian, but more foreign ships.

He mentioned that throughout the country there are of 7000 ships passing without restraint to take the fish, by calculations that Indonesia lost about Rp 300 trillion annually, and almost 70-80% of the fish exist in the East.

“It is also a necessary investment by eastern Indonesia that fish was not taken by them, and we are only a spectator. This opportunity is immense. What to do? Buy ships as much as possible, Ladies and gentlemen, “the President’s message.

The President reminded that in the future all products, raw materials, and all that is related to the wealth we have found industrialization, and downstream by the private sector, in whatever way it must be done. Governments have a duty to build infrastructure.

“I believe, we are able to do so, we are optimistic that we can do it. But the business world is supposed to move faster ahead of the government, the government behind to provide support”, the President said.

The meeting was held in order to promote the potential of eastern Indonesia region and mobilize business cooperation and investment that are open to domestic private entrepreneurs and foreign investors.

Accompany the President in this event were Minister of Trade Rahmat Gobel and Minister of State Secretary,  Pratikno (Humas Setkab/ES)