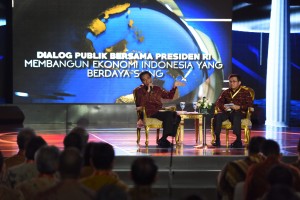 President Joko Jokowi Widodo said that economic condition that sometimescanbe dark, difficult, challenging, and sometimes bitter, is a challenge that must be surmounted.

We know that the road that we go through is not always as smooth and as comfortable as we want and indeed, the road is not always smooth and bright, said President Jokowi in a public dialog held by the Indonesian Economists Association (ISEI) in Jakarta on Wednesday (30/3).

However, the President asserted that apart from difficult situations must be faced, an important thing is that people knowthe real conditions without cover-up .

Because we know, in the future, we will face global condition and global competition that changes every second, every minute, every hourvery rapidly, he said.

It is such a situation that we will continue to face. Therefore, we have to begin adjusting with the global challenges, which, we like it or not, we must face,  he added.

According to President Jokowi, in the future, two things that cannot be rejected are transparency and competition, especially in 2018 when there will be transparency in the banking sector.

He added that in the future, all financial transactions would be transparent, so people will no longer be able to hide their money overseas.

The President added the countrys vision inthe future is competition.He added that Indonesia must gear up in order to win the competition.

I always listen to what ISEI says about work ethics, competition, de-regulation, public services, productivity, and efficiency but what we are also face is speed, the President said.

On that occasion, President Jokowi also touched on the issue of a rapid growth of era of digital economy.

The presence of ride-hailing applications such as GoJek, Uber, Grab, and others, the President added, areexamples that digital economyis part of the global competition andis things that cannot be rejected.

We are indeed latebut we hope that developers of digital economy can keep up with other countries because I see a huge potential in these sectors. We must not let the potential taken by other countries,  the President said.

The President added that when he visited the United States some time ago, he made time to visit Silicon Valley, the headquarters of Yahoo, Twitter, and Google. Based on the meetings, the President said,he really wanted to accelerate the development of digital economy.

During the public dialog, President Jokowi also answered questions about incentives that the Government will give in supporting the growth of digital economy.

President Jokowi added that for start-up, joint venture, and others, it is possible that the Government will give tax incentives.

From the Government, we will probably provide tax incentives but for the funding, OJK (the Financial Services Authority) will handle it but we will push to prepare it,  the President said.

On that occasion, President Jokowi reminded once again of the deregulation and competition.

He added that in order to win the competition, Indonesia needs simplification, acceleration, healthy competition, and we must not  put a shackle on ourselves.

He also hopes that Indonesia can be result-oriented instead of procedure-oriented.

In this competition, logistics costs and transportation costs must be lowered. This is the key, he said.

The President also once again reminded of infrastructure development that Indonesia-centrist.

Therefore, hehopes that  infrastructure development is accelerated and integrated.