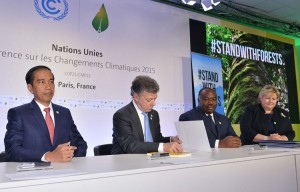 President Joko Jokowi Widodo reminded all sides that in making efforts to boost economic growth, the environment must not be ignored.

The President delivered the statement on Tuesday (1/12) before returning to Indonesia after attending the UN Framework Convention on Climate Change (UNFCCC), Conference of Parties (COP) 21 in Paris, France.

Do not let high economic growth make us ignore the environment, President Jokowi said to the reporters before heading to Le Bourget Airport in Paris, France, on Tuesday 1 December 2015.

The bilateral meetings could support us in the management of the environment, renewable energy, peat land restoration, reforestation, and conservation in protected forests, President Jokowi said.

According to the plan, President Jokowi and his entourage is also scheduled to transit in Abu Dhabi, the United Arab Emirates.