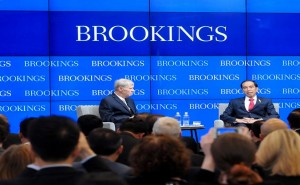 President Joko Widodo with the moderator Dr.Richard Bush in an event at Brookings Institute, in Washington DC, US, on Tuesday (27/10)

President Joko Jokowi Widodo said that many people asked him how Indonesia could face economic issues and deal with economic crisis.

I regret the fact that Indonesia could not anticipate the fundamental changes that happened around us. However, I see the economic slowdown as a chance. A chance for us to reform, President Jokowi said that while reminded all that the fruit of success will usually pay off when problems arise.

When delivering policy speech at the Brooking Instutition, an American think tank in Washington DC, US, on Tuesday (27/10) morning local time, President Jokowi said that there were many challenges faced by Indonesia in its reforms, in which one of the challenges is underdeveloped infrastructures.

Along with the infrastructures construction, the President added, the Government also pay attention to reform measures.

It is intended to free the private sectors, both domestic and foreign, from impartiality policy, complicated permits and misguided protectionism which caused many enterprises and industries at loss for a long time, President Jokowi added.

President Jokowi said around 7 (seven) weeks ago, the Government of the Republic of Indonesia launched the first Policy Package that cover 134 rules and regulations which the Government shall revise, rationalize and cut it.

Then, 3 weeks ago, President Jokowi said, the second De-regulation Package was launched, and followed by the third, fourth and fifth packages. Meanwhile the sixth package is now under preparation.

If we study the system of permits and regulation deeper, we will see the inconsistency, misguided and unreasonable policies, President Joko Widodo said.

The President assessed that the policy rationalization and deregulation will be implemented by his government with full commitment.

Our deregulation programs are a manifestation of sustainability policy. As well as the infrastructures construction, the deregulation will also gain its momentum and accelerate at full speed in the months ahead, the President firmly said.

As a clear indication of his seriousness to reform the economy, the President also conveyed his wish to join the Trans Pacific Partnership (TPP) or trade agreement among twelve Asia Pacific countries including the US, Japan, Brunei Darussalam, Chile, New Zealand, Singapore, Australia, Canada, Malaysia, Mexico, Peru, and Vietnam.

Answered the question from moderator Dr. Richard Bush in Washington DC regarding China, President Jokowi said that China is a big country which is powerful in Asia, yet oftenly creating friction to its neighboring countries.

We consider China as an important partner for Indonesia and we need to strengthen cooperation with China because Indonesia is exporting several commodities to China, the President said.

However, President Jokowi stressed that Indonesia is also seeing another countries such as the US, Russia, Japan, and the Middle East as important partners for Indonesia.

Regarding South China Sea, President Jokowi asserted that Indonesia is not a part of the conflict; however, he added Indonesia needs to participate in creating peace and defence stability around that areas.

Therefore, the President added, Indonesia calls on all parties to restrain themselves from taking actions that will lessen the trust between the parties.

We want ASEAN countries and China to start discussion on the content of Code of Conduct (CoC). Indonesia wants to play an active role in that issue, President Joko Widodo said. (UN/SI/ES) (RAS/EP/YM/Naster)