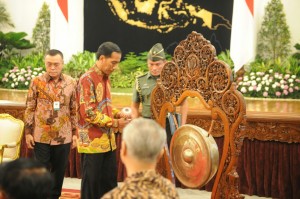 President Jokowi hit the gong as the opening mark of the 7th National Conference of Traditional Jamu Association, at the State Palace, Jakarta, Monday (25/5)

President Joko Widodo (Jokowi) asked the producers of herbs that are members of the Traditional Herbal Medicine (Jamu) Association seriously to develop of herbal medicine (Jamu) as a product that gives the brand, which gives an image and a perception that the herbal medicine is Indonesia.

“Indonesia is herbal medicine, we should dare to build the brand,” President Jokowi said who claimed also as a fan of the herbal medicine while giving a speech at the opening of the 7th National Conference of Traditional Jamu Association, at the State Palace, Jakarta, Monday (25/5).

According to the President, he had asked other countries related to the number of Indonesian products that have not been able to get into their market. However, Jokowi admitted, in any country when it comes to drinks, food and health, its protection and barrier is very tight and very heavy.

Regarding of raw material products, President Jokowi believe, “Where the shortfall is in order to convey, such as curcuma, the prices went up but should be multiplied production. As Ginger, then Java chili, turmeric as well, I guess it is not the product that is difficult to develop, its very easy,” Jokowi said.

President pointed to the example in Merauke, Papua, just from 1 (one) district there are 4.6 million hectares of land, if planted rice that will produce 8 tons / hectare, almost 35 million tons at once harvest. In fact, now our national production is approximately of 60-70 tons, only 1 (one) district. He mentioned there are four (4) districts are more and less has the same conditions.

Therefore, President added, the government in the future should create a good business climate, which is conducive to the herbal industry and traditional medicine. “Please give feedback to me,” Jokowi message.

The opening of the 7th National Conference of Traditional Jamu Association attended by the Chairman of Association, Charles Saerang, Minister of Industry, Saleh Husin, and Minister of Tourism, Arief Yahya. (Humas Setkab/ES)