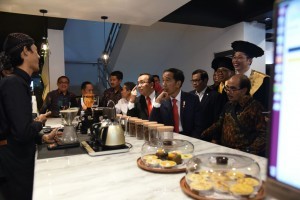 President Jokowi stops by co-working space in cooperation between UGM and Bank Mandiri, at the UGM campus in Yogyakarta on Tuesday (19/12) afternoon. (Photo: Fitri/PR)

President Joko Jokowi Widodo believes the loss of some jobs due to rapid technological developments and, at the same time, new types of jobs will emerge. Similarly, when an old business disappeared then a new business emerges. To that end, the President asked colleges to respond to this.

“When the political, economic, socio-cultural landscape changes, the research agenda and community service of the university certainly needs to change as well,” President Jokowi said when giving a public lecture in the 68th Dies Natalis of Gadjah Mada University (UGM), at the Graha Sabha Pramana, Yogyakarta, on Tuesday (19/12) morning.

The President said that the character of human resources and the types of profession needed by Indonesia in the future, those are, politicians and bureaucrats, will always be important but the number will not increase. However, professional workers, engineers, doctors, pharmacists, and others are needed more and more equipped with international standard competence.

What is important to increase the number, according to the President, is entrepreneurship which will generate new job opportunities that will build added value. However, the President deplored that our entrepreneurial spirit is still very low.

The President mentioned that, in the 2017 Global Entrepreneurship Index, Indonesias entrepreneurship still ranked 90 out of 137 countries. In Asia Pacific, Indonesia ranked 16 out of 24 countries, which is still low. The number of innovations and patents, the President went on to explain, is also still low, which is ranked 87 out of 137 countries. “These are the facts that we should know and this is our challenge ahead,” President Jokowi firmly said.

The Government, according to the President, is currently working hard to build an ecosystem for entrepreneurship development, encourage start-up businesses, and build ecosystems for beginners, small businesses to grow.

The President expressed hope that UGM becomes a driving force in higher education, plays an active role as an entrepreneurial ecosystem. “Do not get stuck in the routine. We should continue to develop new ways. Students’ aspiration to innovate must be grown, new creations should be facilitated and developed,” the President said, adding that sociopreneurs who solve problems in the community should be given support.

The President admitted that he is very happy, given the sociopreneurs among the young generation of Indonesia have begun to appear, who created a recycled plastic bags made of natural materials, or applications for fish feeders efficiently. “This is very good, making apps for online and other trades, making historical movies of the Republic of Indonesia and then sold through YouTube or Netflix. Creating viral games and cartoons about the heroism of Indonesia which was developed through the digital world,” the President explained.

To conclude his general lecture, President Jokowi reiterated that UGM could be an example to not get stuck in the routine, but be an example for major, radical changes in higher education that respond to the challenges of science and technology and the changing times.