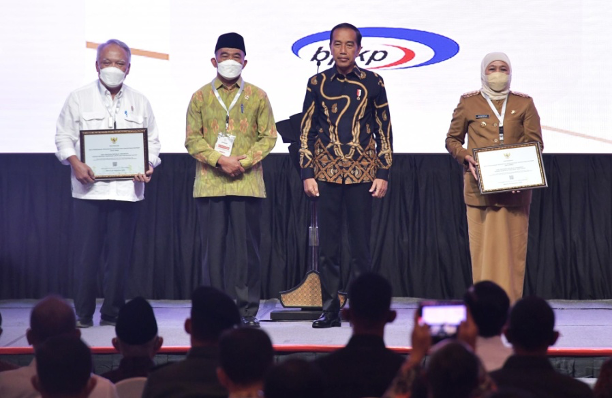 President Joko “Jokowi” Widodo asked his staff to work together in accelerating the extreme poverty alleviation in the country.

This was addressed by the President on Thursday (09/29), during a briefing at the Jakarta Convention Center (JCC) to all ministers, heads of institutions, regional heads, leaders of state-owned enterprises, regional military commanders, regional police chiefs, and the head of the high prosecutor.

“To achieve the target we are aiming for, central and regional areas must work together on the environment, clean water, and all things related regional income,” said the President.

“This is the target, the name and address are clear, the social assistance is directed there, and to repairing slum houses,” he said.

“Efforts are needed to reduce extreme poverty by 1 percent annually from 2020 to 2024, so that it reaches zero percent by 2024. Presidential Instruction number 4 of 2022 assigns 28 ministries/agencies, as well as all local governments, to take steps to accelerate extreme poverty alleviation,” said Luhut.

First, priority areas for extreme poverty alleviation from 2022 to 2024 will be identified.

Second, the availability of data on Targeting for Extreme Poverty Alleviation (P3KE) that is compatible with population data and civil registration.

“The data includes the level of welfare and socioeconomic characteristics, making it easier for central and regional governments to make more precise interventions,” he explained.

Third, general guidelines for P3KE implementation for ministries/agencies and local governments are being developed.

On that occasion, Luhut also emphasized the importance of all parties working together to accelerate the program to alleviate extreme poverty.

“The Coordinating Ministry for Human Development and Cultural Affairs oversees the strategy for alleviating extreme poverty, which consists of reducing the burden of spending and poverty pockets. Meanwhile, the Coordinating Ministry for the Economy is in charge of a revenue-boosting strategy. All of this involves all stakeholders outside of the government,” Luhut explained.