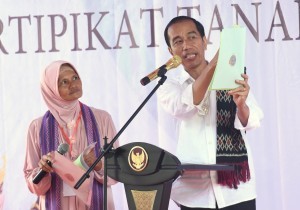 President Jokowi has a dialogue with a resident at the handover of certificates at the frontyard of the Office of Rote Ndao Baa Regent, Rote, East Nusa Tenggara, Tuesday (9/1) morning (Photo: Rahmat/PR)

In his remarks at the handover of land certificates at the frontyard of the Office of Rote Ndao Baa Regent, East Nusa Tenggara, on Tuesday (9/1) morning, President Joko Jokowi Widodo reminds not to let unity and brotherhood amongst citizens to be broken due to their differences. Thus, people must respect each others political choices.

East Nusa Tenggara to hold regional elections to select governor, regents, and mayors. Therefore, all people must maintain the good atmosphere of the fiesta of democracy. There should be no issues regarding SARA (ethnicity, religion, and race). People should not also slander and sneer each other.

We are brothers and sisters. Choose the best leaders and remain friends with others. Do not ruin your good relations with others due to different political choices, the President says.<>

For the candidates who will run at the Regional Elections, President Jokowi asks them to use campaign period by promoting their best programs, ideas, and plans for their regions.

On that occasion, President Jokowi hands over 108,523 land certificates for people in East Nusa Tenggara. The President wants to focus on this issue because he often receives reports on land disputes.

It happens everywhere, almost in all provinces. There are disputes between siblings, between a father and his child, between neighbors, between people and the government or companies. There are a lot of cases of land disputes, the President says.

Those who have received the certifcates can use it as a collateral for bank loan. However, it must be well calculated so that the installment can be paid every month.