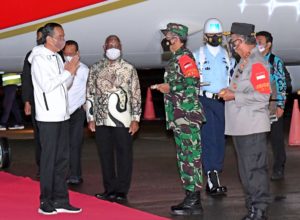 Shortly after arriving in Sorong city, the President and his entourage went straight to their hotel to continue the working visit the next day.

Joining the President during the flight to Sorong city were Speaker of the House of Representatives Puan Maharani, Minister of Investment/Head of the Investment Coordinating Board Bahlil Lahadalia, and Special Staff to the President Billy Mambrasar.

The President has been in the land of Papua since Friday (01/10) afternoon. On Saturday (02/10) morning, the President inspected and inaugurated several arenas that will be used for the 20th National Sports Week (PON) at Papua Bangkit sports complex in Jayapura regency, Papua province.

On Sunday (03/10), the Head of State carried out a number of activities in Merauke regency, starting with the inauguration of a new terminal at the Mopah Airport.

In Merauke, the President also inaugurated Sota Integrated Cross-Border Post (PLBN), inspected the facilities there, as well as inspected and shopped at Sota market.

The President ended his working visit in Merauke by inspecting sports arenas and watching wushu matches at Merauke cluster of the 20th PON at Head Sai Sports Center. (BPMI of Presidential Secretariat/UN) (DH/MMB)