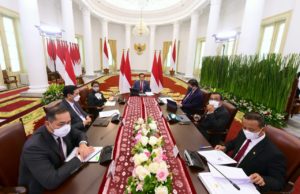 During the UN Climate Change Conference (COP26) in Glasgow, Indonesia reinforced commitment to gradually initiating an energy transition towards an environmentally friendly energy. However, energy transition needs a huge amount of funding and access to green technology.

President Joko “Jokowi” Widodo has affirmed that the commitment should be supported with technology and funding.

“For a developing country like Indonesia, [energy transition] should be supported by technology and funding so it is not going to put an enormous burden on the people, the industry, and the state finance. Indonesia needs US$50 billion for transformation towards new renewable energy and it costs US$37 billion for forestry sector, land use, and sea carbon,” President Jokowi said during a dialogue with Executive Chairperson of the World Economic Forum (WEF) Klaus Schwab on Thursday (01/20) held virtually in an event called World Economic Forum: State of the World Address.

“We must develop an innovative funding scheme. Such question is coming from many developing and underdeveloped countries,” he added.

According to the President, concrete results of the efforts can only be proven by a strong cooperation, adding that the Government cannot work alone and needs cooperation both domestically and globally.

Domestically, the Government needs to cooperate with state-owned enterprises in energy sector and private institutions to design a just and affordable energy transition.

“On cooperation at the international level, the Government has embarked on cooperation with Asian Development Bank (ADB) to initiate Energy Transition Mechanism (ETM) from coal to renewable energy,” he remarked. (FID/UN) (AW/EP)