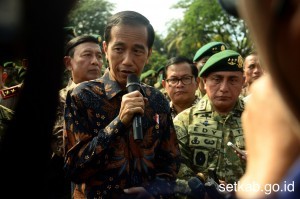 Although all countries are facing problem of food availability, President Joko Jokowi Widodo ensures that food stock in Indonesia is safe at least until May 2017. This is due to the length of the rainy season throughout 2016.

“All countries are facing disaster, food availability. And I need to say here, our food stock is safe until May 2017,” the President said after giving a briefing before 3,500 personnel of Division I of the Army Strategic Reserve Command (Kostrad), in Cilodong, Depok, West Java.

According to the President, we benefited because it is raining throughout the year. As a result, there are paddy fields in the regions which usually were harvested once, now could be harvested twice. Likewise, twice now three times.

“I think it was our luck that the rainfall continued throughout the year in all regions,” the President said.