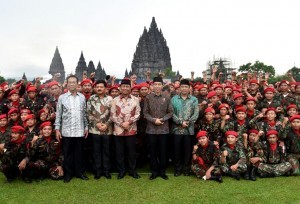 President Joko Jokowi Widodo always monitors the procedures for handling the recent earthquakes. Meteorology, Climatology, and Geophysics Agency (BMKG) reports that a 6.9 magnitude earthquake rattles several parts of Java Islands and causes the issuance of tsunami warning. Therefore, the President asks the people to always be careful and alert.

People must be careful and alert because an earthquake occurs in the middle of the ocean can cause tsunami, the President said after attending Apel Kebangsaan Pemuda Islam Indonesia (Indonesian Islamic Youth National Ceremony), at the courtyard of Prambanan Temple, Sleman Regency, Special Region of Yogyakarta, Saturday (16/12).<>

The President ensures that the early warning system for disasters works properly. Thus, people do not need to worry because the recent disaster has shown that the warning system as well as evacuation process run well.

The President also appreciates the peoples quick responses to the early warning issued by BMKG regarding the potential of tsunami after the tremor. He even monitors the situation until 3 a.m. Thankfully, the situation is not getting worse and the people can return to their houses. The handling process is also immediately conducted.

The President has also received a report that three people killed due to the disaster and a number of houses are damaged. He will always monitor the current situation and the handling process. (BPMI/EN) (MMB/YM/Naster)