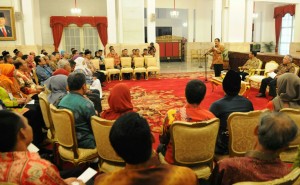 President Joko Widodo (Jokowi), assigns Coordinating Minister for Economy, Sofyan Jalil to represent him to give a speech when entertaining of the award recipients of Adhikarya Pangan  Nusantara, at the State Palace, Jakarta, Friday (16/1) morning.

The event is intended to fulfill the promise of President Jokowi to invite them to the awards ceremony in the rice field, Balai Besar Tanaman Padi, Subang, West Java, on Friday (26/12) ago.

Present at the event 94 recipients of the award, in addition to special awards for (4) four governors who has been 3 years in successive to receive the award, namely:  Governor of West Java, West Nusa Tenggara, South Sulawesi and East Java.

In his speech, Coordinating Minister for Economy Affairs, Sofyan Jalil, conveys a message of President Jokowi, in order that the model farmers able to realize the determination of President Jokowi towards food self-sufficiency within three (3) years.

Quoting President Jokowi, Sofyan Jalil said, the government will build 49 reservoirs within 5 (five) years. “About 11 reservoirs constructed with state budget allocations, two (2) remaining reservoirs will be financed by Budget Amendment 2015. In addition, the Government will also build irrigation canals with a total of 1 million hectares in 2015’s,” Sofyan said.

Attended the event, among others: Minister of Agriculture Amran Sulaiman and Minister of Public Works and Public Housing Hadimuljono Basuki.

Around 10:00 am, President Jokowi suddenly attends the event, and open dialogue with the farmers who are already come in advance.

As reported earlier, President Jokowi as Chairman of the Food Security Council has presented the award in the rice field, Balai Besar Tanaman Padi, Subang, West Java, on Friday (26/1) ago.

At that time, President Jokowi could understand if there were award recipients who were disappointed with the events organized in the rice field, as is usually the event held since 1979 was held at the Palace.

In the same category also awarded 10 regents/mayors and 10 heads of villages from all over Indonesia. (WID/Humas Setkab/ES)