President Jokowi: Entrepreneurs Do not Be Afraid to Face the ASEAN Economics Community 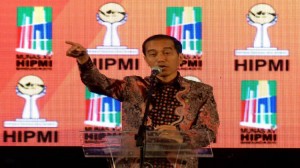 President Jokowi, gave a speech at the National Conference (Munas) of HIPMI, in Bandung, West Java, on Monday (12/1)

President Joko Widodo (Jokowi) alludes to the atmosphere of mysticism in the business community in facing the validity period of the ASEAN Economic Community (AEC) by the end of 2015. The President acknowledged the worries of some entrepreneurs to be the enactment of the AEC.

However, President Jokowi who spoke in front of young entrepreneurs who follow the National Conference (Munas) of Indonesian Young Entrepreneurs Association (HIPMI), in Trans Luxury Hotel, Bandung, on Monday (12/1) morning, argued, the government leaders in Southeast Asian Countries actually also have a sense of worries with the opening of the ASEAN Economics Community (AEC) at the end of 2015.

“They are all worried too, because they can not predict what will happen next with the opening of the ASEAN Economics Community (AEC),” Jokowi said. Thus according Jokowi, Indonesian entrepreneurs should not be afraid. “Ladies and gentlemen do not be afraid, anyway, they are also scared and the most feared is Indonesia,” he said.

With a population of 250 million, while the others amount 24 million, 15 million, and 70 million, according to Jokowi, other ASEAN countries also imagine once opened, they will be overrun by many entrepreneurs from Indonesia.

“Imagine if our entrepreneurs invaded other countries. Moreover, who invaded is HIPMI. Once the AEC is opened, they will run so fast, Jokowi said as he advised, its okay, suppose we fall, we should wake up again, that’s all.

The most important, President Jokowi continued, our readiness, it must truly well design. “Indeed, we should have been preparing since 10 years or 8 years ago, every year is processed, checked, controlled, so that our readiness this year has been in the position of mature readiness,” he said.

President Jokowi delivered, while attending the Asian Summit, in Nay Pyi Taw, Myanmar, he saws Indonesian contractors who won the tender, there are some 1, 2, 3, 4. This means, he added, our contractors were already there to build roads and buildings. It means, actually, we already ahead, so do not be afraid by the ASEAN Community Economics, but indeed we must be ready.

However, President Jokowi advised that entrepreneurs should not only eager to open a business abroad. Domestic market should also be maintained in order not controlled by foreigners. “The important thing is that the opportunities of domestic not to be taken by foreign entrepreneurs. If here can be secured, entrepreneurs who has the readiness could assault to another country,” he concluded.