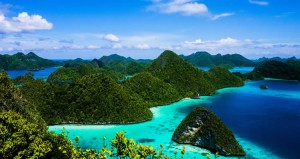 In the framework of economic development acceleration in Papua, the Government considers that necessary to set the development policy based on natural resources (SDA), taking into account the aspects of economic, social, cultural, legal, and environmental in Papua.

On that basis, President Joko Widodo (Jokowi) on May 21, 2015 has signed the Presidential Decree Number 16 Year 2015 concerning the Study Team of Natural Resources Management Policy for Economic Development of Papua.

While Secretary Tim held by: 1. Deputy Political, Legal and Security Affairs, Ministry of Planning/Bappenas; and 2. Director General of Mineral and Coal, Ministry of Energy and Mineral Resources.

“The team as referred tasked to conduct an evaluation and review of the policy on the management of natural resources in Papua in the frame woks of Papua economic development,” reads the decree.

Evaluation as referred, is done by considering: a. The synergies policy of Government and local governments in Papua economic development based on natural resources; b. Economic, social, cultural and environmental problems in Papua; c. Increased state revenues; and d. The  measures necessary for the implementation of the obligations of the natural resources management, particularly in order to carry out the processing and refining of minerals on the results of mineral development in Papua.

“The team in the execution of the duty establishes the Secretariat that tasks and composition of membership is determined by the team leader,” reads Article 4 of Presidential Decree No. 16, 2015.

In performing the duties, Tim involve, cooperation and/or coordination with the Ministry/ Non-Ministry Institutions, local government, stakeholders, business entities and other parties, which scope of duties and functionally related to the task of team. In addition, the team can recruit the individual experts, institutions, and/or business entity.

“The task implementation results of the team as referred in this decree, could be used as a model for the management of other natural resources,” reads Article 6 of the Decree.

As for the cost required in the implementation of task of the team, according to this decree, charged on the State Budget at the Ministry of Energy and Mineral Resources.

The President asked that team submit a report on the execution of the duties at least 1 (one) month or at any time if necessary.