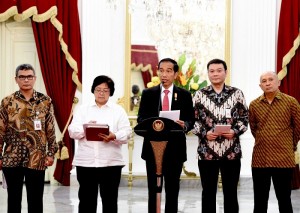 President Jokowi during the announcement of Peat Land Restoration Agency on Wednesday (13/1) at Merdeka Palace, Jakarta.

In a bid to restore forest and peat land fires that are burned every year in several provinces in Indonesia, the Government has announced the establishment of the Peat Land Restoration Agency (Badan Restorasi Gambut/BRG) under the Presidential Regulation Number 1 of 2016 that was signed by President Joko Jokowi Widodo on 6 January 2016.

The agencys tenure will expire until 31 December 2020.

I would like to announce the establishment of the of the Peat Land Restoration Agency (Badan Restorasi Gambut) through the Presidential Regulation that I signed on (6) January, the President said in his press release to the reporters at Merdeka Palace on Wednesday afternoon (13/1).

On that occasion, President Jokowi also introduced Nazir Foead, a former WWF Indonesia Chairman, who takes the helm of the agency.

I consider Nazir Foead as someone with competence and experience in restoring forests and peat lands.  He especially has the ability to coordinate with ministries, institutions and   international organization networks, the President said.

President Jokowi has also assigned BRG to immediately formulate an action plan and implement it as an effort to show the international community that Indonesia is serious in addressing peat land destruction.

In the meantime, Minister of the Environment and Forestry Siti Nurbaya said that BRG is a non-structural agency under and responsible to the President.

She added that in details, BRG is tasked to coordinate and strengthen policies of restoring peat lands, to make planning, to control and to cooperate in peat land restoration, to make mapping and to determine the zoning of land protection and the function of cultivation, to build infrastructures and facilities to border peat land, and to re-arrange peat land that has been burned.

She also said that BRG will be responsible to carry out dissemination and education to the people about the restoration of peat lands, to supervise and maintain infrastructures in the lands that have been converted and to carry out other tasks assigned by the President.

Meanwhile, BRG consists of a head, an agency secretariat, and four deputies and in performing its tasks, BRG is also supported by a technical directive team and an expert team.

The technical directive team includes governors whose regions are affected, deputies and  director generals (of the ministries and institutions) whose functions are relevant with the peat land restoration, while the expert team includes representatives from universities, research institutions, professionals, and the general public.

Meanwhile, the newly-appointed Presidential Spokesperson Johan Budi said that BRG was established in response to the impacts of the forest and peat land fires.

He also said that it is necessary to establish a special agency to restore peat lands, concerning that the lands to be restored reaches around 2 million hectares.

It is expected that with the establishment of this agency, (forest and peat land that have been burned) can be restored. It is predicated that they will be restored in around 5 yeas, Johan said.