President Jokowi Expects Batam to be Developed to Full Potential 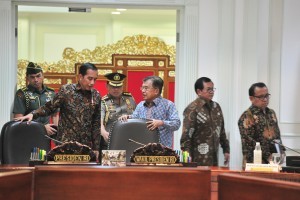 President Jokowi is in conversation with Vice President Jusuf Kalla before leading a Limited Meeting on the Development of Batam, at the Presidential Office, Jakarta, Wednesday (12/12). (Photo by: Jay/PR Division)

President Joko Jokowi Widodo, on Wednesday (12/12), once again led a Limited Meeting on the Development of Batam, at the Presidential Office, Jakarta.

The President said that limited meetings discussing the development of Batam and its surrounding areas were held on December 2015, January 2016, and March 2017. It has been discussed many times, President Jokowi added.

The Government, the President added, expected Batam and its surrounding area which considered having strategic position to be developed to its full potential so it can attract more investors.

Therefore, President Jokowi called on Coordinating Minister for the Economy Darmin Nasution to explain Batam development including its transformation from Free Trade Zone (FTZ) to Special Economic Zone (SEZ), as well as to report on matters related to permits, legal certainty for investors, infrastructure provision, seaports, and others.