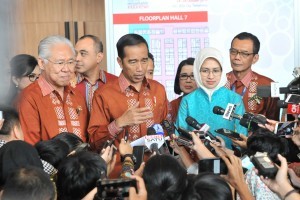 According to the President, there are many unethical practices conducted by politicians to attract the voters prior to the election.

The President further said that divide and rule politics and politics of hatred in political campaign are out of date practices. Today, the President added, politics shall be about selling programs, ideas, achievements, and track records.

“If the politics of hatred or divide and rule politics is still conducted in politics, then that is what I mean with sontoloyo politics” President Jokowi further said.

In the meantime, the President also firmly said that the freedom of giving criticism and giving opinion is still guaranteed.