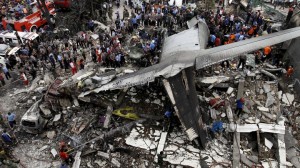 President Joko Widodo (Jokowi) expressed condolences over the crash of Hercules C-130B, in Medan, North Sumatra, on Tuesday (30/6) afternoon, and pray for the family may be given patience and strength.

The condolences were conveyed by President Jokowi through his official twitter account Joko Widodo @jokowi that uploaded on Tuesday (30/6) night.

“My family and I expressed condolences over the crash of Hercules C-130. May the bereaved families are given patience and strength. -Jkw,” Wrote Jokowi adding Jkw code as a sign of himself that uploaded the message.

The president called for the evacuation of victims of Hercules plane should be prioritized. Furthermore, we evaluate the age of the aircraft and defense equipment. “May be we kept away from the unfortunate accident,” wrote Jokowi.

As known C-130B Hercules plan belonging to the Indonesian Air Force crashed two minutes after takeoff from the airport Suwondo, Medan. Pilot Captain Sandy Permana had planned to return to the runway, however crashed in public places.

The plane that comes from 32 Air Squadron Air Force was carrying 101 passengers along with 12 crewmembers.

Lt. Sutrisno explained, the Hercules plane that flew to Medan were on a mission of general aviation. “Before departing from Malang, this Hercules plane in airworthy condition, so it was flown to undergo an operation, and today Hercules flew halfway,” he said.

Currently the North Sumatra Police DVI team is still waiting for data on victims of their families to be matched with the data of victims after death.

Therefore, Setio Purwanto hopes the families of victims immediately to send the data to the hospital through the command post set up in front of Adam Malik Hospital, Medan. (*/ES)