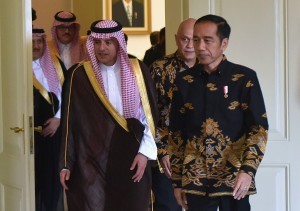 President Joko Jokowi Widodo expressed concern over the murder of Saudi journalist Jamal Khashoggi at the Saudi Consulate in Istanbul, Turkey, on 2 October 2018.

The President expressed his concern over the case and Indonesia called for a transparent and thorough investigation of the death of Jamal Khashoggi, Foreign Minister Retno Marsudi said after accompanying President Jokowi in that meeting.

However, he denied allegation that Crown Prince Mohammed bin Salman or intelligence agency knows about the operation.

According to Jubeir, the Government of Saudi Arabia is determined to punish those who are responsible for this murder and ensure that something like this can never happen again.

Retno said that Adel bin Ahmed Al-Jubeir paid a visit to President Jokowi prior to first joint ministerial commission meeting between Saudi Arabia and Indonesia to be held in Jakarta on Tuesday (23/10).

Both this meeting and the bilateral meeting to be held tomorrow have been scheduled a long time ago considered those are implementations of King Salmans visit to Indonesia last year, Retno added.