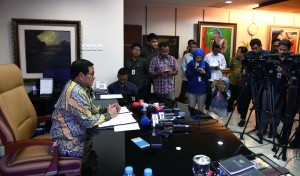 Cabinet Secretary Pramono Anung talked with reporters at his working office on the 2nd floor of Building III of the Ministry of State Secretariat (Kemensetneg), Jakarta, Monday (14/11) afternoon (Photo: JAY/PR)

With regard to the bombing of the Oikumene Church, Samarinda, East Kalimantan, on Sunday (13/11) morning, President Joko ‘Jokowi’ Widodo has instructed the Indonesian National Police (Polri) and law enforcement officials to take decisive measures against the perpetrator, whether this is a sole perpetrator or there is someone behind it.

“We learned that a three-year-old Intan Marbun passed away, and this child certainly did not know anything why she should bear the consequences. She were playing on the front porch of the church,” Cabinet Secretary Pramono Anung told reporters at his office on the second floor of Building III Kemensetneg, Jakarta, Monday (14/11) afternoon.

Quoting President Jokowi, Cabinet Secretary asserted that whoever the perpetrator is, be it single or group, we must take firm steps and the perpetrator has to be severely punished.

Cabinet Secretary went on to explain that obviously, the punishment for such perpetrator should be harsher. Otherwise, he would commit the act again and never feel guilty.

“The fact is that he still commits the bombing, and therefore there must be tough actions against the perpetrator. If we look at the pattern, the way, he did it openly, let alone he did it in the daylight. This indicates that the perpetrator committed it with full awareness,” Pramono said.

Cabinet Secretary Pramono Anung pointed out that there are two steps that must be carried out, namely de-radicalization and law enforcement. Cabinet Secretary admitted that the former is not one hundred percent successful, as what happened in Samarinda yesterday.

“So once again, first, the de-radicalization program remains to be carried out and this will be conducted by the Indonesian National Counterterrorism Agency (BNPT). Second, the rule of law is also very important,” Pramono explained.

When it comes to the network, it is definitely not a single network. It is certainly old network. Given the act was committed during the daylight without the protection of anything, then the perpetrator was easily nabbed by the public, this shows that indeed he was prepared to be a martyr,” Pramono concluded.

Regarding the casualties, Cabinet Secretary guarantees that the Government would certainly pay attention to them. (FID/JAY/ES) (MUR/YM/Naster)