President Jokowi: Facilities to Support MotoGP Must Be Completed by 2020 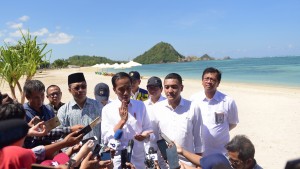 Mandalika Special Economic Zone (SEZ) in the resort island of Lombok – which is scheduled to host world-class MotoGP motor raving event in 2021- has showed a remarkable development, according to President Joko Jokowi Widodo.

It is such a remarkable development. Supporting facilities in this area are also being built, including public toilets, President Jokowi said in Lombok, West Nusa Tenggara (NTB) province, Friday (17/5).

Nevertheless, the President reminded that the development of Mandalika SEZ – particularly the MotoGP circuit  should apply a high standard to ensure proper management of the area. President Jokowi expressed hope that all supporting facilities for the event can be constructed immediately.

We hope we can watch MotoGP held in Mandalika, Lombok, West Nusa Tenggara in 2021, he said.

Development of the airport and roads near the SEZ has been completed and the location of circuit has also been decided. Construction of facilities must begin no later than January 2020 and the facilities to support MotoGP must be completed by the end of 2020.

The access is not solely to support the MotoGP event, but to connect Mandalika so that the area can be developed into a new Bali, he said.

In the meantime, President Director of Indonesia Tourism Development Corporation (ITDC) reported that the construction of 7 out of 11 hotels to be built in Mandalika has completed.  (DID/DNS/ES)