President Jokowi Filed the Chief of Staff Gen. Gatot Nurmantyo as a Candidate of TNI Commander 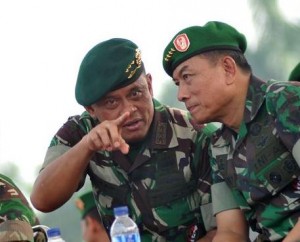 According to Fahri, the President does not explain the reason for the appointment of General Gatot Nurmantyo, as TNI Commander Candidate. President just explained the procedure, because General Moeldoko will retire so it needs to be replaced.

Furthermore, the Bamus will forward the letter of President to the House of Representatives Commission I for fit and proper test for candidates of TNI Commander.

When asked about the estimated execution time of fit and proper tests to the candidate TNI Commander, Fahri Hamzah admitted could be done next week. “Very likely,” he said.

How ever Fahri notices, that the President also provide certainty. “There should be no shock when we carry out the fit and proper test, when suddenly there was a change in the time of implementation. Neutrality in the military it should appear, “the message.

In Act No. 34 of 2004 on the TNI stated, to appoint a military commander, the President proposes one candidate to the House of Representatives for approval. The approval of Parliament against Commander Candidate selected by the President submitted no later than 20 (twenty) days, -not including reses-period, commencing from the candidate received an application for approval by the House of Representatives (*/ES)