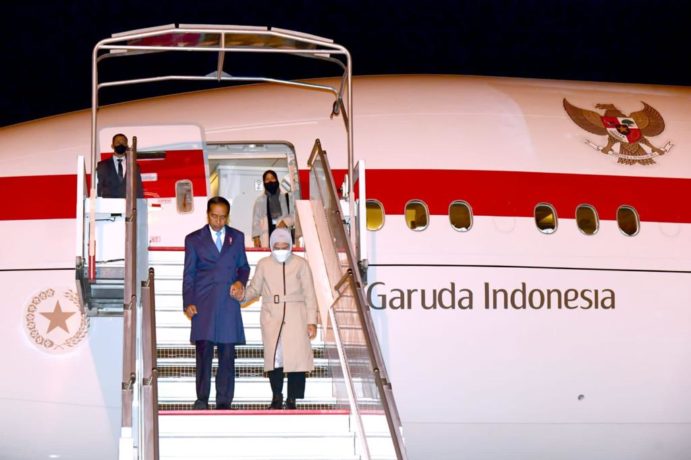 Welcoming the President were Belgian Ministry of Foreign Affairs official Anne Vandormael, European Council official Simona Nikiforova, Indonesian Ambassador Extraordinary and Plenipotentiary in Brussels Andri Hadi and his wife, and Defense Attaché at the Indonesian Embassy in the Hague accredited to Belgium and Luxembourg Muhamad Wirda Prayogo and his wife.

President Jokowi and Ibu Iriana then headed to the hotel where they spent the night in Brussels before continuing their working visit agenda of the Summit of the 45th Anniversary of the ASEAN-EU Relations.

Upon arrival at the hotel, President Jokowi and Ibu Iriana were greeted by dozens of Indonesian citizens who had been waiting for the President and the First Lady.

Accompanying the President and the First Lady during their visit was Minister of State Secretary Pratikno. In the meantime, Coordinating Minister for Economic Affairs Airlangga Hartarto, Minister of Foreign Affairs Retno Marsudi, and Minister of Industry Agus Gumiwang Kartasasmita were in Brussels to attend meetings in the series of the ASEAN-EU Summit and make the preparation for President Jokowi’s visit. (BPMI of Presidential Secretariat/UN) (RI/HD)