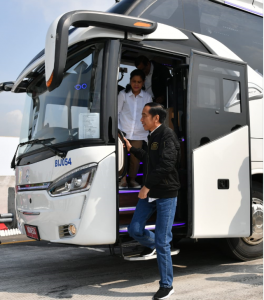 The President and his entourage departed from the hotel where they stayed at around 07:45 Western Indonesian Time and started the trip from Surabaya  Indonesais second largest city-  by entering the 36.27-kilometer Mojokerto toll road, then continued the trip to Jombang as far as 40.5 kilometers.

After inaugurating the four sections of the Trans Java toll road of the East Java section at Bandar Km 671, the Trans Java Toll Area, Jombang Regency, Pesident Jokowi continued the trip by entering the Kertosono-Ngawi toll road with a total length of 117.40 kilometers. 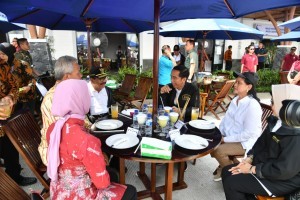 The President and his entourage then stopped at the Km 597 B rest area of the ??Ngawi-Kertosono Toll Road, Madiun Regency to take a rest. During the trip, the President also enjoyed local culinary such as Madiun pecel rice complete with gendar crackers and fried chicken. He also took time to make a video blog (vlog) with his own mobile phone through which he introduced and explained about the local culinary he tasted. The President and his entourage then traveled to Semarang, Central Java.

The President expressed hope that the operation of the Jakarta-Surabaya toll road could improve the efficiency of transportation in Java.