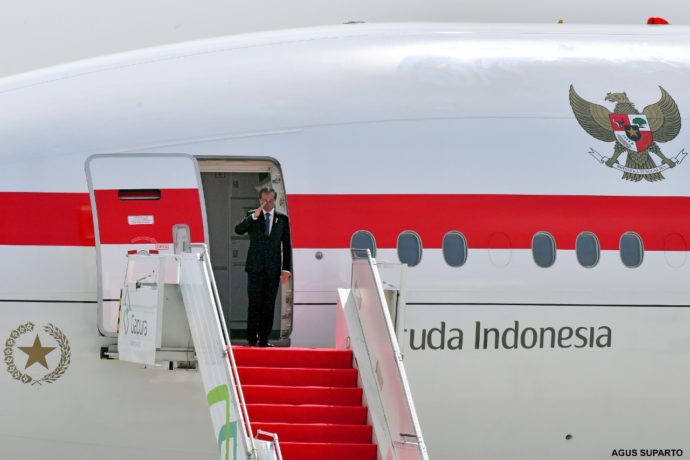 President Joko “Jokowi” Widodo and his entourage are scheduled to fly with a wide-body aircraft owned by flag carrier Garuda Indonesia for working visits to Italy, the United Kingdom and the United Arab Emirates for budget efficiency.

By flying with this wide-body aircraft, the 13-hour trip to Rome can be completed directly without the need for transit. If we fly with the existing Presidential Aircraft, we need to make a layover. This is the President’s first working visit abroad during the pandemic and we must pay attention to observing health protocols,” Head of the Presidential Secretariat Heru Budi Hartono said, Friday (29/10).

According to Heru, the decision to fly with Garuda Indonesia aircraft is based on consideration on several factors, including time efficiency, budget efficiency, and health protocols implementation.

Heru went on to say that Cabinet Ministers accompanying the President during the working visit also fly on the same aircraft.

He went on to say that Minister of Finance and Minister of Foreign Affairs had to go to Rome earlier for ministerial meetings and preparing for the President’s visit and will join the President for the remainder of the working visit.

“The advance team for Abu Dhabi and Dubai visit will also join the entourage on their return to Indonesia, so they don’t need to buy commercial airline tickets,” Heru said, adding that Military Secretary to the President Air Vice-Marshal M Tonny Harjono has ensured the strict observance of the health protocols during the flight.

“This is a long-haul flight and Military Secretary to the President will implement strict rules on this flight, including obligation to wear a face mask and to maintain distance between the passengers,” Heru remarked. (BPMI of Presidential Secretariat/UN) (RI/EP)