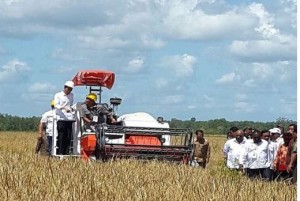 President Jokowi during the main harvest in Wapeko, Merauke, West Papua, on Sunday (10/5)

President invites all parties to think positively and mutual trust that has been lost. He believes, the presence of foreign journalists in Papua is now no longer be able to provoke the citizens, especially at this time, the infrastructure projects in which become a plan, now have begun to enter the stage of realization.

“There should be no questions tilted again,” asked President Jokowi when asked for his response about the presence of foreign journalists to Papua which more covering the activities of armed groups.

President Jokowi who accompanied by First Lady Iriana visits to Merauke to do the harvest in Wapeko and distributing seeds of the tilapia into the drainage.

On that occasion, President Jokowi took time to dialogue with local farmers while providing bikes for those who can answer the questions. (Humas Setkab/ES)