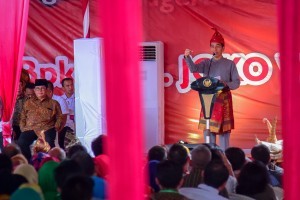 President Joko Jokowi Widodo stated that conflict in our daily interactions usually starts from small things, such as differences in political choices, either in regional or presidential elections.

People forget that elections occur once in every five years, the President said while giving a speech at the awarding ceremony of customary title of Komering, at Griya Agung, Palembang, South Sumatra, Sunday (25/11).

President Jokowi claimed that differences in political choices make some people do not want to greet each other, though, the President continued, we are fellow brothers and countrymen. Don’t forget that. Dont ever let yourself to be provoked, he said.

He also invited all people to choose their own political candidates based on their own conscience and rational opinions. Moreover, even the slightest friction or conflict should not occur.

President Jokowi reminded that Indonesia is a large country consisting of approximately 714 tribes and has more than 1,100 regional languages.

This is the gift of God that we must be grateful for, the President said, adding that if the people can maintain their unity, it will be the greatest asset and the biggest energy for the Indonesian people to be more advanced.

Therefore, all Komering traditional people are invited to play an active role in maintaining the unity and harmony of Indonesia.