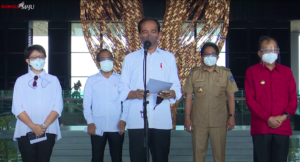 Following Indonesia’s G20 presidency next year, President Joko “Jokowi” Widodo has emphasized that this momentum must be used to provide services and showcase the best from Indonesia as the host of the international event.

“We must be able to take make the most of the G20 Summit as a showcase of our country’s ability in controlling the COVID-19 pandemic, both from health and economic perspective,” President Jokowi said after inspecting a number of venues for G20 Summit 2022 at Nusa Dua, Bali province, Friday (8/10).

According to the President, during the G20 Summit, Indonesia will also display the progress that has been achieved as well as the country’s cultural richness.

The island of Bali, according to the President, has a good reputation and experience in organizing international events.

On that occasion, the Head of State also called on related parties from the Central Government, regional governments, and Balinese people to continue working together in controlling COVID-19 ahead of the event.

“I was briefed that 98 percent of Balinese people have received the first dose of vaccine and 79 percent of them are already double-jabbed. This is our strength in preparing the G20,” he remarked. (DND / UN) (EST / EP)