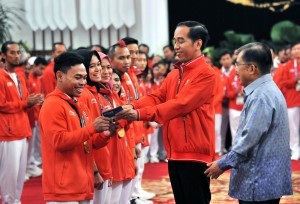 The Government accelerates distribution of cash bonus to the 2018 Asian Games medalists. Rather than distributing the bonus after the Games is over or the week after, President Joko Jokowi Widodo on Sunday (2/9) at the State Palace directly gave the bonus to the athletes even before the  Asian Games closing ceremony starts.

As for individual bronze medalist, they get Rp250 million, and Rp200 million and Rp150 million each person for double bronze and bronze for team respectively.

In his remarks, President Jokowi said that Indonesia is proud of the athletes achievement, and their fighting spirits in achieving victory.

President Jokowi told that the public was skeptical about the target of winning 16 gold medals; however, Indonesia proved that it has successfully clinched 98 medals consisting of gold, silver, and bronze from all sport branches. It is such a leap, huge leap that can serve as a foundation for our upcoming achievements, the President added.

The President also expressed appreciation for the athletes for training and working very hard since the past few year in preparing themselves for this Games, for breaking their limit, and challenging themselves through trainings, tryouts, and competitions both at home and abroad.

I know that you were still striving to fight even when your legs gave up. It was for the victory, the President said, adding that all Indonesians are also grateful for them and welcome their achievements with a heartfelt emotion. The people appreciate your sacrifices and struggles, the President added.

President Jokowi went on to say that the country will wait for more achievements from the athletes, and Indonesia thanked them for the history they have made. Therefore, the President admitted that he urged  Minister of Youth and Sports to immediately disburse cash bonuses to the athletes right before the Asian Games closing ceremony.

If Indonesia adds medals in the afternoon or after this event ends, I will directly give the bonus for the additional medalist(s) here. You never know, President Jokowi concluded.