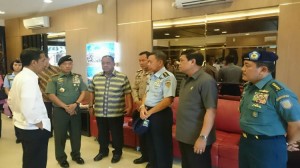 President Joko Widodo (Jokowi) who was in Papua to make working visits there had received the reports concerning the disaster which befell AirAsia Flight QZ8501. The plane lost contact and then went missing while en route from Surabaya to Singapore on Sunday morning (28/12).

President has received the explanation and then given his directives concerning the disappearance of AirAsia Flight QZ8501, Cabinet Secretary Andi Widjajanto wrote in his short message, a little while after the disaster.

As previously reported, AirAsia Flight QZ8501, which left Juanda Airport, Surabaya, on Sunday (28/12) at 05.20 AM west Indonesia time, was reported to have lost contact at about 06.17 AM west Indonesia time or appropriately one hour after it took off. Up to now, there hasnt been any further information yet about the planes whereabouts.

The plane which carried 155 passengers aboard should have arrived in Singapore at 08.30 AM Singapore time or 07.30 AM west Indonesia time on Sunday (28/12).

According to Acting Director General of Air Transportation Djoko Murjatmodjo, before the plane lost contact, the pilot had managed to inform the Air Traffic Control (ATC) that the weather was bad. Then the pilot asked to avoid the clouds and rise to the altitude of 38,000 feet.

The radar in Jakarta had identified the contact with the ATC and confirmed the pilots statement to avoid the clouds and ask to rise to the altitude of 38,000 feet. At 06.16 AM west Indonesia time, the plane was still detected in the radar, then at 06.17 only its signal was detected, and shortly afterward, the plane lost contact, Djoko said in the press conference in Jakarta on Sunday afternoon (28/12).

Meanwhile, Vice President Jusuf Kalla, via his personal twitter account @PakJK, also sent up a similar prayer, wishing that the plane and all aboard it will be found in a safe condition.

Lets pray together that AirAsia Flight QZ8501 en route from Surabaya to Singapore which lost contact will be found soon and all aboard the plane are safe, Vice President Jusuf Kalla wrote. (ES)