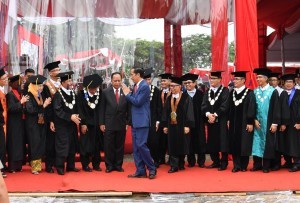 Logistics transportation in Indonesia costs 2.5 times as much as that of in Malaysia and Singapore. This means, in order to bring goods from one place to another, it costs 2-2.5 times more expensive. Consequently, goods sold in Indonesia are more expensive than those of other countries.

The statement was enunciated by President Joko Jokowi Widodo when delivering his remarks at the 60th Anniversary of Diponegoro University at Diponegoro University Stadium, Semarang City, Central Java Province, Tuesday (17/10). “Why do we build infrastructures? The answer is we want our competitiveness to be better than other countries. Our global competitiveness needs to be improved, this year it jumped from 41 to 36 out of 137 countries,” the President said.

At the beginning of his remarks, the President mentioned that in 1977 Indonesia built the Jakarta-Bogor-Ciawi (Jagorawi) Toll Road of 60 km long and the construction completed in 1981. At that time, the Toll Road drew attention of many countries, such as Malaysia, Vietnam, Thailand, the Philippines, and China. However, until 2014, toll roads built in the country only reached 780 km. “Nearly 35 years more, it is only 780 km. Whereas, China which used to see us, imitate us, it built four thousand km more a year. It now has 220 thousand km. We only have 780 km,” the President said.

Out of a number of infrastructures the Government built, one of which is the port. Starting from the Port of Tanjung Priok in Jakarta, Kuala Tanjung in North Sumatra, and Makassar New Port in South Sulawesi. Next year, the Government will also start the construction of ports in Sorong, Papua. “Why should we build seaports? That is because our country is an archipelagic country, seaport – maritime foundation base – is a must,” the President said. Similarly, the airport development, Indonesia as a large country that has 17 thousand islands, but not all ships can reach all of the islands. “Therefore, we also built an airport on the remote islands of Natuna, Miangas. This is just one example as we built small airports,” the President said.

On many occasions, President Jokowi conveyed about the rapidly changing world, including the speed of information traffic and the development of science. “Disruptive innovations are present in almost every aspect of life these days,” the President said.

The presence of social media such as Facebook, Twitter, and Instagram, has unwittingly influenced people’s lives today. “Therefore, universities should anticipate and the most important thing is to drive disruptive innovation,” the President explained.

Moreover, according to the President, the university should also be able to respond to changes and current specific needs to fit with disruptive innovations.

For example, faculties or courses should adjust to the current developments. The faculty of economics, the President gives an example, should not only have majors in accounting, management, and development studies but also the department of logistics or retail management. “Because that’s where the economy will move,” the President said.

Last but not least, universities must dare to change the learning method that fits the character of the younger generation. “Encourage innovation, facilitate students to become active learners, both inside and outside the classroom. All that is necessary for Indonesia to have young generations who have character and ready to compete,” the President said. “A strong work ethic, good leadership, anti-corruption, tolerance, innovative, and creative spirit because the competition between countries is so tight and fierce,” the President was quoted as saying in the Press Release of Deputy for Protocol, Press, and Media of the Presidential Secretariat, Bey Machmudin.