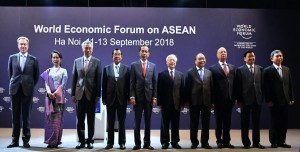 President Joko Jokowi Widodo said that the current global economy condition is heading to the so-called Infinity War just like in the movie Avengers: Infinity War in which Thanos – the villain figure – threatens to wipe out half of the worlds population.

Nevertheless, President Jokowi believes that he and his fellow Avengers are ready to tackle the problem.

Thanos wants to wipe out half of the population because he believes the earths resources are limited, said President Jokowi in his remarks at the World Economic Forum on ASEAN at the National Convention Center, Hanoi, Vietnam, Wednesday (9/12).

According to the President, the fact is that human natural resources are not limited and technology development, for example, has increased efficiency and provided capability to enhance resources.

Scientific research proves that our economy today is lighter physically and in volume since the last 12 years. The total weight of television, camera, music players, books, printer press, and magazine are replaced by the lightness of cellphones and tablets, the President said.

The President also cited an example in how the power plants powered by huge and heavy coal, are replaced by thin and light solar panels.

Before several state leaders attend the forum, President Jokowi also explained that it is time for economy to develop not only from natural resources, but from unlimited human resources. Asian Games and Asian Para Games that are held in Jakarta and Palembang are a spectacular show from Asias talented people. More than 14 thousand athletes and 7 thousand officials from 45 countries compete in 40 sporting events, the President said.

Furthermore, President Jokowi added that human Resources also drive the fourth Industrial revolution or 4.0 Industry revolutions and on April 4th the Indonesian Government launched a government industrial revolution program called Making Indonesia 4.0. I believe that Industrial Revolution 4.0 can create more jobs and increase equality because one of the important aspects from Industry 4.0 is derivation of product costs and services and can also lower price of products to be cheaper and make it easier to be reached by people with low income, said the President.

Nevertheless, President Jokowi believes that ASEAN, including Indonesia will be ahead in the 4.0 Industry Revolutions.

However, President again asserted to head to that direction, ASEAN nations must prevent the trade war to become Infinity War. Thanos according to The President, is not an individual, but a mistaken belief that in order reach success, others must lose.

The Infinity War is not only about the trade war, but is about all of us who have to learn from history, with creativity, energy, collaboration, and partnership. We as human beings can enjoy abundance and we can create no Infinity War but unlimited resources, the President concluded. (BPMI President Secretariat/ES)(HYP/EP/Naster)