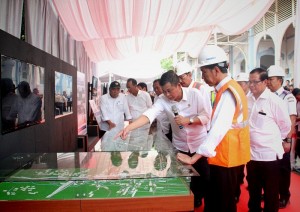 After inspecting the construction of the toll road connecting Medan and Kualanamu Tebing Tinggi, in Deli Serdang, President Joko Jokowi Widodo and his entourage continued his working visit to Binjai Station, Binjai City, on Wednesday (2/3) afternoon by car.

The President also led the groundbreaking ceremony of the construction of 8-km-railway overpass between Medan and Bandar Khalipah Stations in Medan.

On the occasion, the President in his remarks said that the Government will focus on and prioritize infrastructure development in order to reduce logistic and transportation costs so that price of goods will be cheaper and Indonesian products could compete with other countries.

Transportation and logistic costs in Indonesia are 22.5 times higher than the costs in neighboring countries, including Singapore, Malaysia, and others. It means we can not expect our products, commodities, and goods to compete with other countries if the infrastructures have not improved, the President said.

Therefore, the Government will accelerate infrastructure development in Sumatera, Java, Kalimantan, Sulawesi, and Papua in order to integrate all modes of transportation, including toll roads, railways, and seaports.

On the same occasion, Minister of Transportation Ignasius Jonan reported to the President that Trans Sumatra railways will be constructed by re-activating existing tracks that previously have not been used due to budget constraints.

Trans Sumatra railways connecting Aceh-Medan-Riau is projected to operate in 2021.