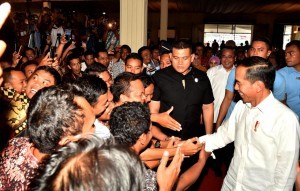 President Jokowi further said that after four years, the village fund is expected to support economic empowerment and village innovation, citing an example of a village that becomes a tourism village and can generate a lot of income for villagers.

The President went on to say that the implementation of the village innovation program is expected to include the development of the local economy through entrepreneurship by utilizing existing resources.

On that occasion, the President expressed his hope that the villages could start thinking about increasing the added value of village mainstay product by producing well-packed products.

“For example, in villages there are many coffee plantations that produced green coffee beans. Now the coffee beans have been sold in the form of final product with good packaging and brand, or at least in form of intermediate goods, President Jokowi said.

According to the President, selling final product will give greater value added and more profit for the villagers, about 10 to 30 times higher, compared to selling raw or intermediate goods. (BPMI/EN)