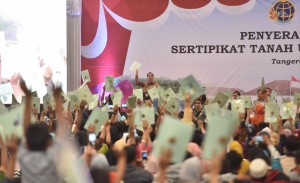 President Jokowi counting the certification of land that has been handed to the people, at ICE BSD, Serpong, South Tangerang, Banten, Wednesday (9/26). (Photo: Deni S/Public Relations)

The Government is determined to accelerate land certification because of many disputes and conflicts among the people who do not have legal evidence of their land ownership, according to President Joko Jokowi Widodo.

But making land certificates from Sabang to Merauke, from Miangas to Rote Island needs a big effort, but I will continue to increase the targets, President Jokowi said.

On that occasion, President Jokowi also reminded residents who received the land certificates to use them well, whether they want to keep it or use it to loan money from the bank. My advice is, if you choose to use the certificate for loan at the bank, you need to calculate it carefully so that it will bring benefits to your families, President Jokowi said.

In the meantime, Minister of Agrarian and Spatial Planning/Head of the National Agency (BPN) Sofyan Djalil reported that from 3.9 million parcels of land in Banten province, there are 56 percent that have been registered and certified.