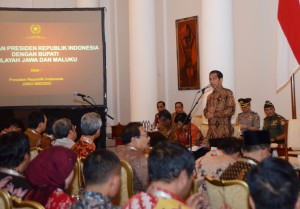 President Jokowi provide guidance in meeting with Regent / Mayor from Java and Maluku, in Bogor, West Java, on Friday (13/2)

President Joko Widodo (Jokowi) said, the issues related to the state and nation in the future should be managed jointly by the central government, provincial, until the regents, and mayors, so that the line is clear.

“What will we do also clear,” President Jokowi said when giving directives in a meeting with Regent/Mayor of Java and Maluku regions, in Bogor, West Java, on Friday (13/2) morning.

However, the President believes, external things that often complicate us to manage the economy will be overcome, if there is good cooperation from the center to the regions, as well as lines.

On that occasion, President Jokowi also said that our economic growth in 2014 ago only 5.1 percent. According to the President, if we want to reduce unemployment, poverty, there is no other way, economic growth should be encouraged. “In three years we expect to be able in upper of 7 percent,” Jokowi said.

This meeting is the fourth stage meeting, which held the President together with the Regent/ Mayor throughout Indonesia. Besides the Regent/Mayor, governors around Java are also present to get the direction from the President.

The governors who were present, among others, Governor of Jakarta, Basuki Tjahaja Purnama; Governor of West Java Ahmad Heryawan; Governor of Central Java, Ganjar Pranowo; Governor of Yogyakarta Sri Sultan Hamengkubuwono X; and Governor of East Java, Soekarwo. In addition, also present the Chairman of the Association of the District Government of Indonesia (APKASI) Isran Noor. (Humas Setkab/ES)