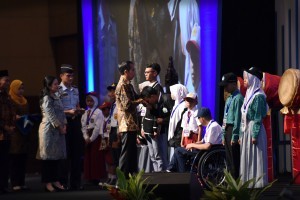 During the opening of the 2017 National Meeting on Culture and Education held on Thursday at Jakarta International Expo (JIExpo), Kemayoran, Jakarta, as many as 2,844 of orphaned students s from 309 schools in Jakarta and the neighboring towns of Bogor, Depok, Tangerang, and Bekasi received Smart Indonesia Card (KIP) from President Joko Jokowi Widodo.

Coordinating Minister for Human Development and Culture Puan Maharani in her remarks said the Smart Indonesia Card program is the manifestation of the Presidents directives to provide equal, justice, and quality education in 2017. Those orphaned students, Puan said, are parts of the targeted recipients of the program in 2017.

Commenting on the Meeting, Puan said three main issues discussed during the meeting were efforts to boost equality in education services, improvement of quality, relevance, and competitiveness and efforts to strengthen management of education and culture.

Discussion on the efforts to promote equality in education services, Puan added, includes optimizing the implementation of the Smart Indonesia Card program and the optimizing of the development of education and culture from rural areas.

Puan further said that the meeting also discussed the strengthening of education management that includes synergy between the Central Government and regional governments in the implementation of Law Number 23 of 2014, especially on the issues of personnel transfer, equipment, financing and documents from the Central to the regional governments, as well as the strengthening of institutions and working units of education and culture.