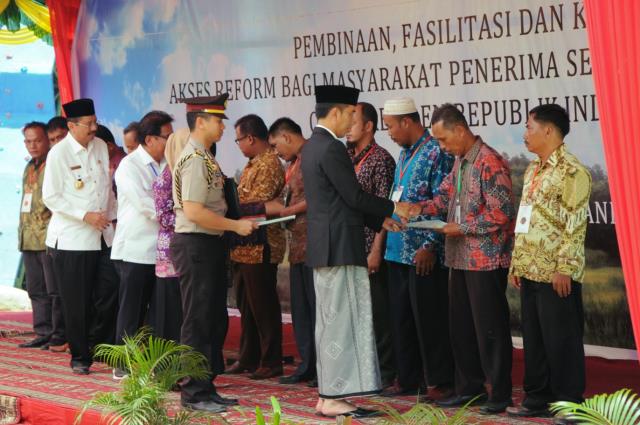 In his remarks, President Jokowi asserted that a certificate proclaims the rights as well as legal status of land owned by the people. Keep it safe, the President said.

The certificate, the President added, is a proof of land ownership in the Unitary State of the Republic of Indonesia.

I instructed the Head of Spatial Planning/ National Land Agency to hand over 5 million certificates by this year, and 7 million for next year. On the other hand, if there is an issue of the lack of land surveyors, the related agency can hire outsourced workers, the President explained.

President Jokowi emphasized that agrarian reform program is a concrete manifestation of justice, and owning a certificate is the first rights of every citizen in the developed countries. Whether people can improve or not, it is the matter of certificate, the President added.

Certificate might also be used as a collateral to take loan in a bank. If you use it as collateral, use it to get capital to start a business, but do not use it to buy a car or a motorcycle, and other unproductive sectors, the President said.

The President added that certificate can also be used to get more income and capital.

President Jokowi believes that on the 100th Anniversary of Indonesian Independence in 2045, Indonesias Gross Domestic Product (GDP) per capita is expected to reach US$29,000, and Indonesia will become a country with no poverty. However, the President reminded all that in order to realize those ideas, the country must maintain its political stability.

Previously, Minister of Agrarian and Spatial Planning/Head of National Land Agency Sofyan Djalil in his report said that the 1,158 certificates are handed over to the representatives of State-Owned Enterprises, Indonesian National Defence Forces, Indonesian National Police, private sectors, farmers, and people living in North Sumatra.