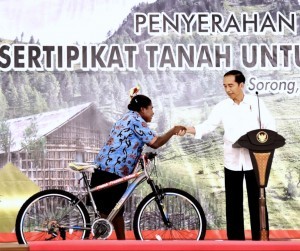 President Jokowi in an event of land certificate handover to the community at the Aimas Convention Center, Sorong Regency, Wednesday (20/12). (Photo: BPMI)

A total of 2,568 certificates were submitted directly by President Jokowi to the community at the Aimas Convention Center, Sorong Regency, Wednesday (20/12). In West Papua alone, it is targeted as many as 15,000 certificates submitted to the people of West Papua this year.

During the meeting, the President again emphasized the importance for the community to have their land certified. Many complaints came to him regarding land disputes due to the absence of this certificate. “Every time I go to the region, the problems that occured is the land dispute between individual and individual, communities and communities, communities and the Government. Why? The community has not yet hold the certificate,” the President said on Wednesday, December 20, 2017.